I bought myself a Peltier Thermo-Electric Cooler (TEC) to have a go at cooling my ZWO ASI120MC telescope camera, to see how it goes at reducing image “noise”, especially for longer time exposures. These things are as cheap as chips (literally!) - I got mine for AU$1.91 on eBay, including postage! 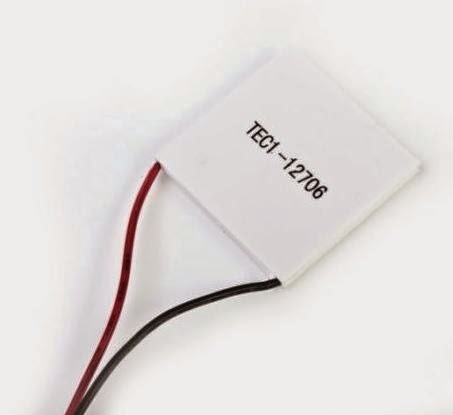 Specifically, the unit I bought is a 12V 60W TEC1-12706 - you can find the datasheet here: http://www.hebeiltd.com.cn/peltier.datasheet/TEC1-12706.pdf  The datasheet suggests it could theoretically reach a Delta-T of about 40 deg C at 6 volts, or close to 70 deg C at 12 volts. I wouldn't expect my results to be THAT good, because I am sure that would only be possible with optimum installation etc; however, if I can set up a heat sink that can keep the hot side to around 40 to 50 deg C, I am hoping to get down to at around 20 deg C below ambient, meaning 0 deg C (or maybe even single-digit negatives?) at the sensor for a night-time imaging session outside. (I'm in Brisbane, Australia - it's a very rare night that ambient temperatures in the evening are in the single digits!)

I'm hoping to make do without needing a cooling fan (because of the likely vibrations that a fan will introduce). I was hoping to use the TEC with a conventional "passive" aluminium heat-sink with protruding "pins" like this: 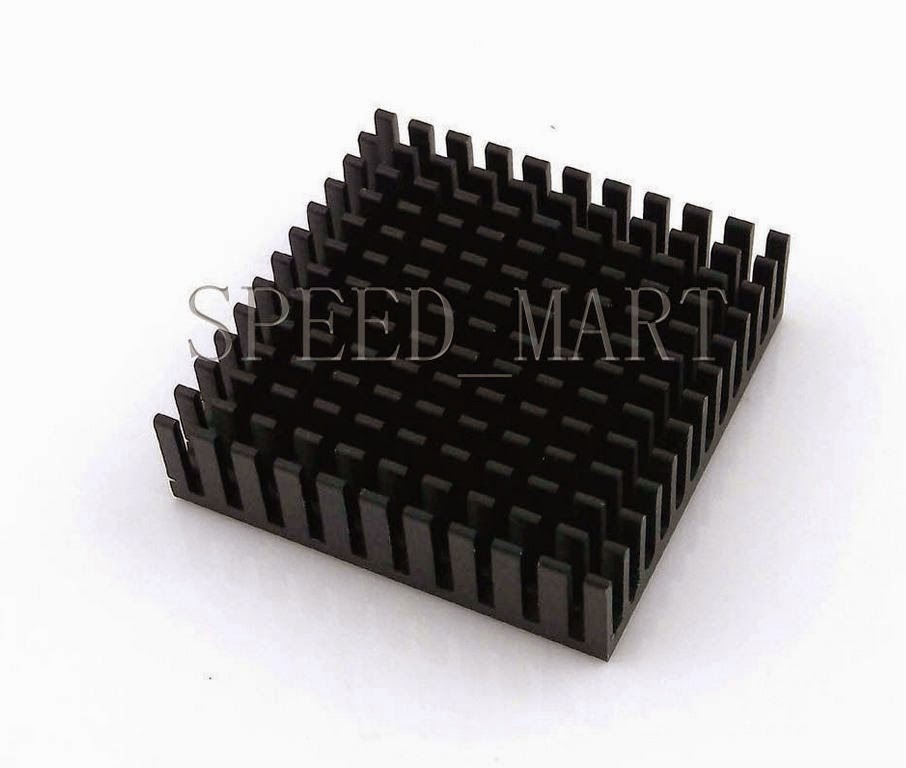 I was hoping that with good heat conduction from the hot side of the TEC straight to the heat-sink, this would allow sufficient heat exchange to achieve satisfactory cooling without needing a fan to shed the heat load. However, early trials with a heat-sink and the TEC running at only 6 volts showed this wasn't going to work - the heat-sink got VERY hot to touch (maybe 70 to 80 degrees Celsius, at a guess?), and the camera sensor on the cold side of the TEC only registered a temperature drop of a couple of degrees C below ambient. Clearly, I need something with a LOT more heat-moving capability to get the heat away from the hot side of the TEC.

So I found myself a cheap CPU cooler with “Heat Pipes”. These things are very clever, using a combination of thermal conductivity and "phase change" (boiling / condensation of a fluid) to achieve a high degree of heat transfer, without any moving parts:
http://en.wikipedia.org/wiki/Heat_pipe

This unit comes with a fan, but I thought I’d have a go at installing it as a passive device first, and fit the fan only if I need to. 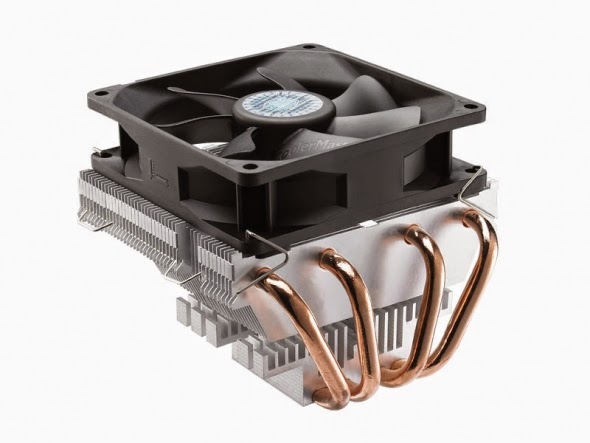 
So I disassembled the fan from the CPU Cooler, and mounted it and the TEC onto the back of the camera body, using silicone thermal pads to get a decent conductivity path between the elements. (I’ll probably use more efficient thermal grease for the final assembly, but the silicone pads are nice and clean for trial assembly / disassembly / modification.) 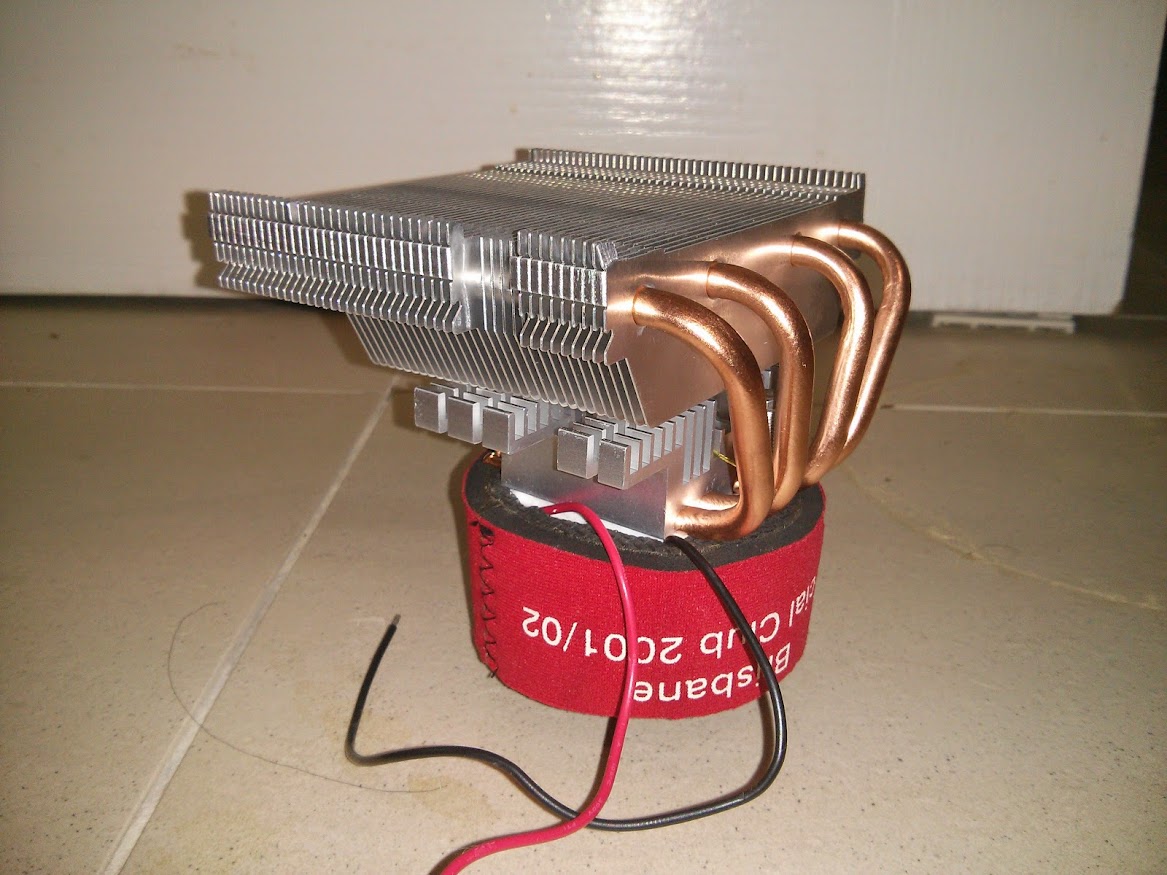 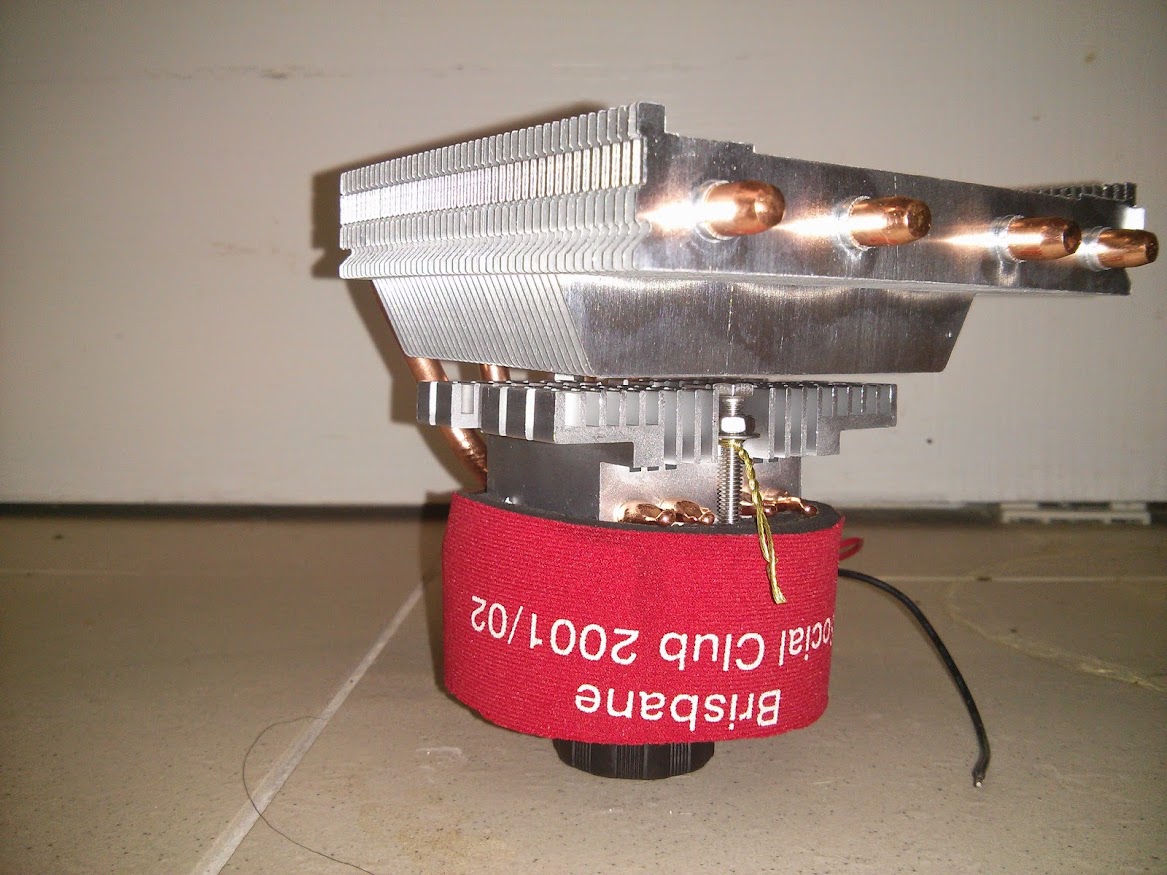 For now, I have held the whole assembly together using 2 M4 screws, and a bit of wire to pull the whole lot into a rigid assembly with good contact between the elements - I will probably rig up a more solid clamping mechanism for the final build. Then I wrapped the camera body in a cut-off stubby cooler (or “Koozie” as I think they are known in the USA) to provide insulation to minimise the amount of stray heat leaking into the camera body.

Time for a test-bed run!

I hooked the camera up to my laptop, and used FireCapture to read the image signal and sensor temperature. I set the exposure to 30 seconds, with Gain pushed right up to 90%, to generate as much image “noise” as possible. (I probably wouldn't use these settings for actual image capture, but I wanted to see how much image noise this sensor-cooling set-up can suppress.)

FireCapture reported the sensor temperature was about 28 Celsius (this is indoors in Brisbane on a spring evening, remember!)

I then hooked the TEC up to a 6 volt SLA battery running through a multimeter to measure the amps. The meter showed the TEC was pulling about 1.5 amps initially, but straight away, the sensor temperature started to drop, and as it fell, the amperage also dropped off a little bit as well.

The bank of cooling fins on the top of the device were getting warm to touch, but not hot - I would guess around 30 to 35 degrees Celsius or so. The finned block of aluminium at the base of the heat pipes, which is in contact with the hot side of the TEC was even warmer, but not burning hot to touch - I would guess about 50 degrees or so. The camera body that I could feel at the bottom end of the insulation "skin" was getting very cold to the touch (but not freezing cold).

Now I know how Dr Frankenstein felt: "It's alive!"

After about 5 minutes, the sensor had stabilised at about 14 degrees Celsius, and the meter was showing about 1.3 amps.

Not bad - I had achieved a Delta-T of around 12 to 14 degrees Celsius on my first attempt! 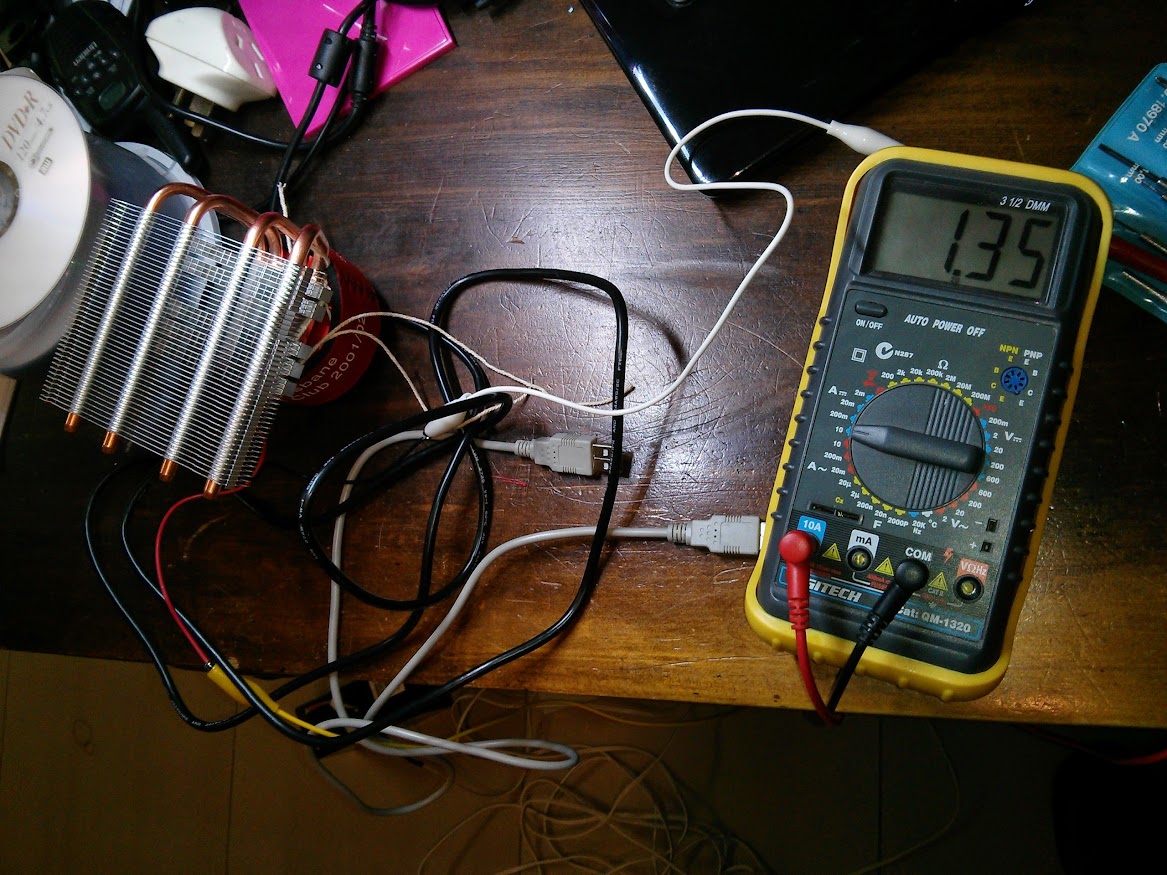 But does it work?

Here's a sample "dark frame" showing the image noise with the sensor at ambient of about 26 degrees Celsius, with a 30-second exposure with 90% Gain: 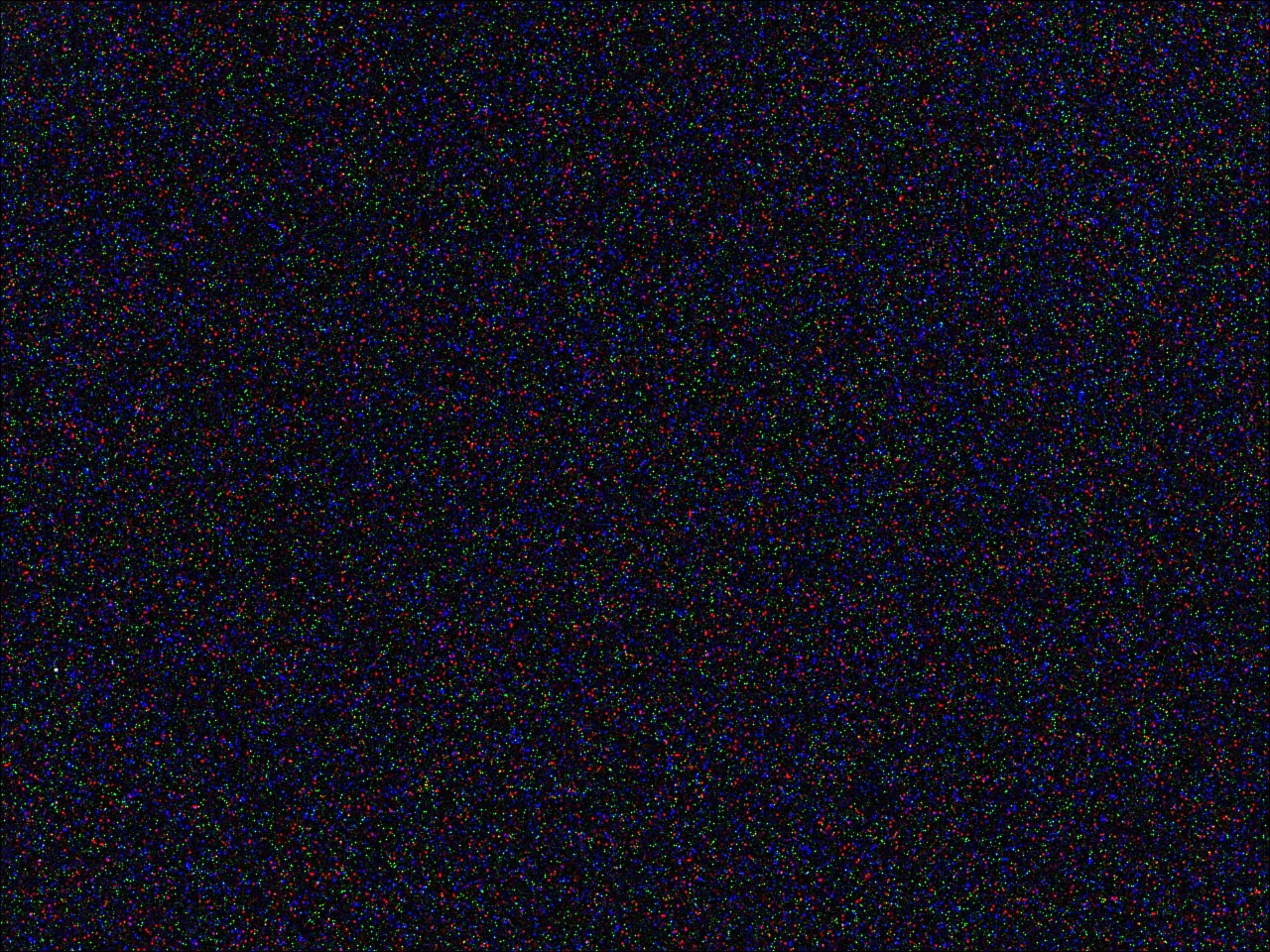 And here's a sample of the image noise when the sensor had dropped to around 14 degrees Celsius, using the same 30-second exposure / 90% Gain - the noise level is certainly much better. 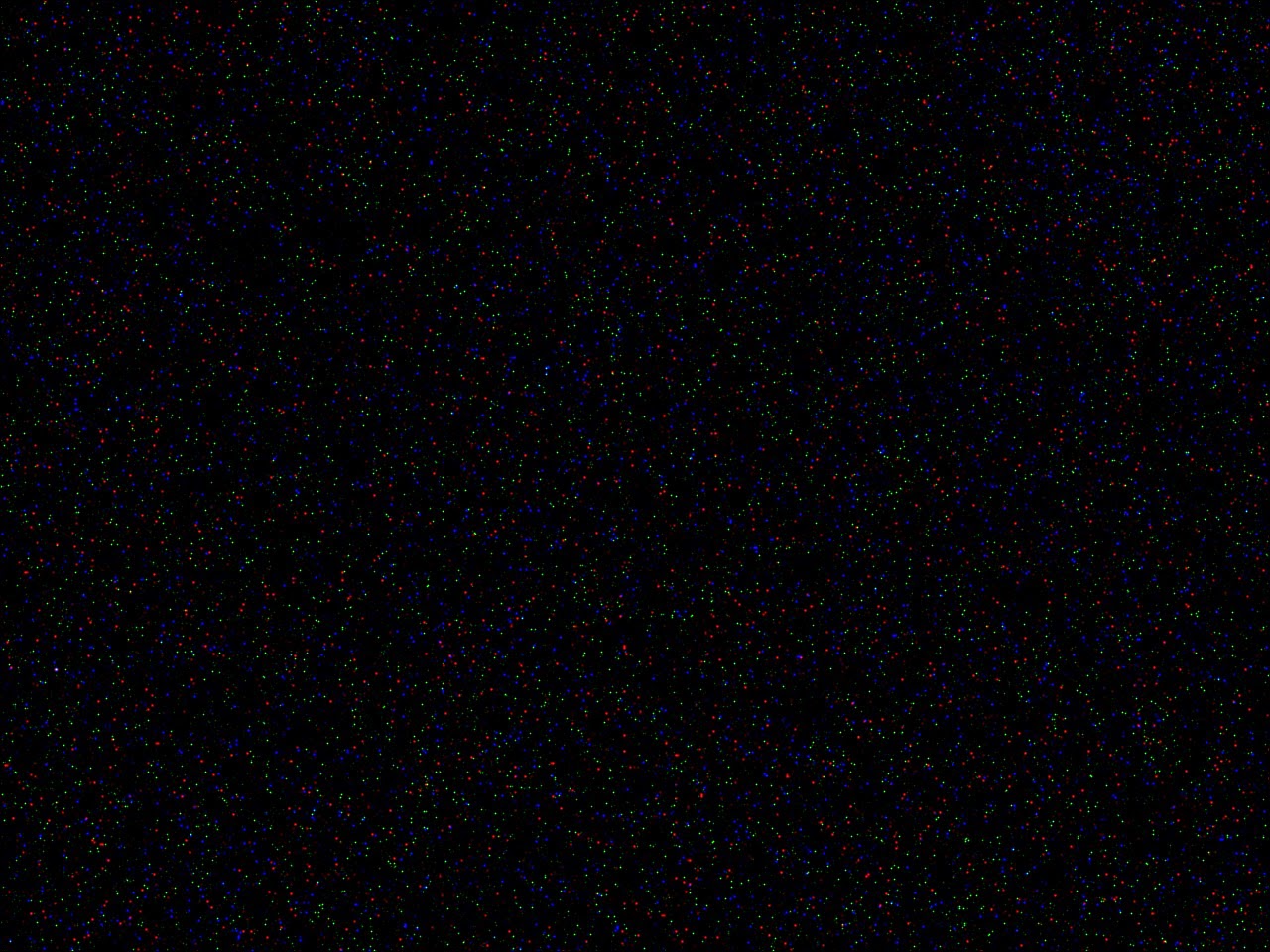 (Toggle back and forth between the two images to see the difference more clearly.)

Both images are straight off the camera as captured in FireCapture, with no “Dark Frame” suppression, and no post-processing of any kind. For actual imaging, I would cool the camera first, then take a Dark Frame in FireCapture to suppress the noise before capturing any images - thereby giving a significant improvement over the ”raw” image sensor data.

I was thinking I might need to use a silica sachet to control dewing on the IR-cut filter - maybe even two, one inside and one outside the IR-cut filter in front of the sensor? Time will tell whether dewing is a problem for me ...

I'm hoping performance is satisfactory with the TEC running at 6 volts, which should mean I can run both the TEC and the scope for several hours.I might also see what it will do running at a full 12 volts. (Theoretically, it should achieve a significantly better Delta-T, and therefore a significantly lower temperature at the sensor, when running at 12 volts.) I might need a bigger battery if I want to run as 12 volts, though - the TEC could pull about 3 to 5 amps at 12 volts, so my 7.2 A-hr battery could be exhausted in an hour or two when powering both the TEC and the telescope mount.


If I need to run at 12 volts to get adequate cooling, I guess I'll buy one of those car jump-starter battery packs - so much for this being a cheap hack!
Posted by Julian Hardy at 10:26